Hijab:  A headscarf, it covers the hair, ears and neck leaving the face fully uncovered with the rest of the body clothed separately, even with jeans and high heels. They come in many colors and styles.

Jilbab: A long shapeless cloak, worn over other garments. Does not cover the head and is worn in addition to a Hijab. They are most commonly dull pastel tones in Jordan and the Middle East but can be brightly colored silky varieties in South East Asia and the subcontinent. 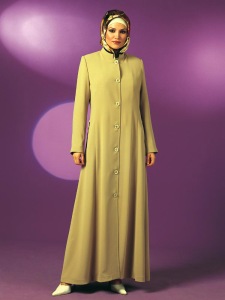 Abaya: Similar to the Jilbab except usually in black only and made from softer materials. These are more “fitted”, though still loose and often have matching hijabs, giving the garment a uniform look. The face is often uncovered. These can vary widely in detail from completely undecorated ones to those garnished with coloured patterns and ‘jewels’. It is this aspect of ‘decoration’ and their slightly form fitting character that makes them less ‘pious’ than a Jilbab in the eyes of some men. 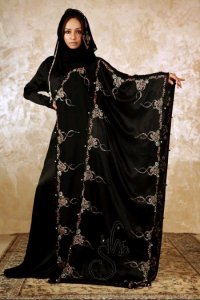 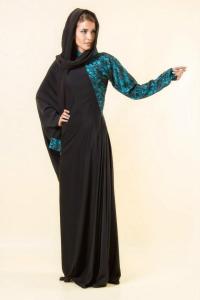 Note: This style, with more color and loosely covered revealed hair is more common in Iran 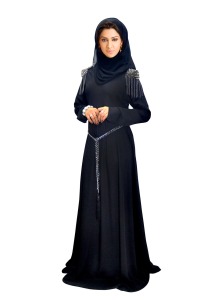 Niqab: A featureless and less shapely version of an Abaya that features a face veil as well. Common amongst the most conservative women and families. Women who wear these often cover every part of their bodies (including their hands) except for their eyes. The Niqab is the Arab version of complete covering while the term ‘Burqa’ refers to styles found more commonly in Afghanistan and Pakistan and Central Asia

Niqabs covering everything including the hands