by Alex Ray
Below a five-star hotel in the West Amman suburb of Shmeisani, three young boys spend their Saturday morning scrounging for pieces of plastic, aluminium and other metals that can be sold for recycling. 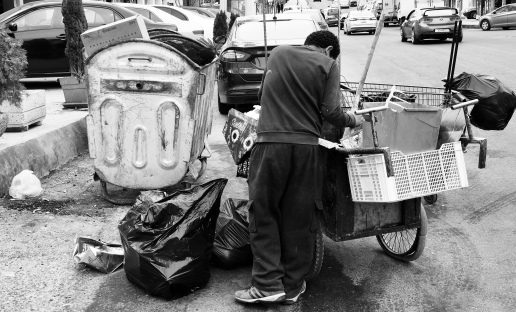 Scrap collectors are some of the only visible recycling systems in resource-poor Jordan. There is no government recycling service, despite offering many opportunities for job creation and formalisation.

The grubby boys wear no safety gear and giggle shyly as I approach and show interest in their work.

When asked where they live Samir (15) quips “from the rubbish bin.” He, Marwan (17), and Mohammad (15) are residents of a nearby Palestinian refugee camp in Jebel Hussein.

They have no other work and spend their time combing the suburbs of Abdali, Shmeisani and Rabia for scrap to be sold to traders in the camp. Metal  gets 10 qirsh (cents) per kilo, aluminium  55 qirsh, and plastic 15 qirsh. They collect around 40-50 kg per day.

In 2015 the Ministry of Municipal Affairs recognised the dire state of recycling in Jordan and the huge opportunities a comprehensive scheme offered the country, by creating “a nationwide plan to set up separate collection systems for recyclables, such as paper, metal, plastic, and glass …” with the ambitious deadline of 2034.